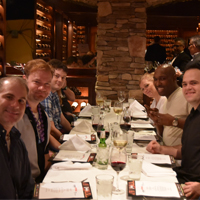 Antronix and partners ECam and TVC hosted approximately 50 Comcast technicians for a congratulatory dinner at Charley's Steak House in Orlando, Florida in January. The technicians were on teams that had made the 2014 CommTech Jeopardy finals.

CommTech Jeopardy is an annual Comcast event that pits regional teams of field technicians against each other to answer questions related to safety, high speed networking, optical fiber, head end and satellite operations, and other topics related to their work.